The season of Lent starts tomorrow, February 17 with Ash Wednesday. The Lenten season is 40 days long, not counting Sundays, and it closes on Easter Day, April 4. Lent/Easter is the most important commemoration in the Christian year because of its focus on the death, burial, and resurrection of Christ as well as the central place that death and resurrection occupy in the theology of the New Testament.

END_OF_DOCUMENT_TOKEN_TO_BE_REPLACED

What’s not to love about a smiling child opening a box of Christmas treasures? Especially when the child is poor, Third World, and whose parents are unable to provide such wonders.

Every year millions of these Christmas boxes are sent all over the world. In the year 2016 the sponsor of these boxes was hoping to send 12 million boxes to eager children. But the boxes are most valuable to the rich people who send them out, thus making them feel generous and benevolent in a cheap sort of way. (A typical box only costs about $15-$25.).

END_OF_DOCUMENT_TOKEN_TO_BE_REPLACED

“God’s got this” – mostly heard when some concern has been expressed concerning someone’s health, a crisis, or unexpected negative event.  On the face of it, it sounds so religious and holy – “Relax, God’s got this.”

But is God really managing the situation?  What about when someone is burying a loved one for whom s/he prayed to be healed?  With bitter tears flowing down his/her cheek.  Does God really “have” it?  To believe that, one has to be willing to accept that God is responsible for the death.  Or what about the little dead child on the Mediterranean beach?  You can’t choose what God’s “got” when you pull out the God card. END_OF_DOCUMENT_TOKEN_TO_BE_REPLACED

I heard for the first time in the early 80’s that American foreign policy was being influenced by the joint ideologies of religious fundamentalism and Evangelicalism.  It seemed far-fetched at the time, but the idea stayed around in my mind in the ensuing decades.

Whatever doubts might have been present were dispatched by Matthew Avery Sutton’s fine history of these movements in America in his newest book, American Apocalypse.

Sutton traces the rise of these movements in America beginning in the mid-1800’s and continuing to the present.  In articulate, dispassionate prose, Sutton lays the case for the powerful and concerted influence of the Religious Right as embodied by Fundamentalism and its partner Evangelicalism.   END_OF_DOCUMENT_TOKEN_TO_BE_REPLACED

“The Universe wanted me to….”

“I was supposed to learn something from that.”

“There are no coincidences.”

“There’s a reason for everything.”

These statements are nearly universal, and there is no pattern to them. Atheists, believers, liberals and conservatives, and people characterized as either spiritual or not use some version of these statements.  Many (I would say most) believe in some form of fate, destiny, providence, or another form of external manipulative power. END_OF_DOCUMENT_TOKEN_TO_BE_REPLACED

Remember the AD 2000 scare about the effect of the new millennium on computers all over the world? Y2K was the name of the scare, and it drove doomsday-ers to their local stores to stock up on supplies for a world catastrophe in the computer realm. Frantic questions circulated about whether planes would drop from the sky and electrical power would fail on January 1, 2000.

In point of fact, there were only a few problems. Among the small problems reported were the failure of two bus ticket-validation machines in Australia and 150 slot machines in Delaware’s race tracks. END_OF_DOCUMENT_TOKEN_TO_BE_REPLACED

I am a church planter working with a nascent church that targets Millennials and folks who have given up on church.  Most of my pastoral life has been spent (over 40 years) in pretty traditional churches that failed in their calling to be outposts rather than fortresses.  My last 10-15 years have been occupied with reading books relating to the matter of how to go about being the church in this age.  Some of them have been critiques of the church such as unChristian by Kinnaman and Lyons.  This book results from research done among Millennials and their assessment of churches today, particularly Evangelicals.

Two statistics are startling to me and have caused me to want to think more and more deeply about what church should look like in this part of the 21st century.  In the 2010 census it was found that 20% of respondents selected “none” in answer to the question, “What is your religious preference?”  “None” has never been that high in previous censuses.  Additionally researchers have begun looking at another group never watched called the “Dones.”  This group has not left God.  On the contrary, they are full of faith.  But they are “done” with church.  The fact that this group is new and growing is proof that we need to put our “pay attention” hats on.

END_OF_DOCUMENT_TOKEN_TO_BE_REPLACED

“I prayed to the universe,” she said.

She believed that rocks and dust could do.

But rocks and dust have no consciousness.

She believed that rocks and dust could do.

But rocks just lay in place until they are used. END_OF_DOCUMENT_TOKEN_TO_BE_REPLACED 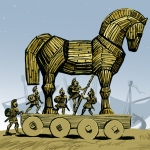 I grew up in a conservative, Southern church that taught us kids that our church was pure in its belief, unadulterated by any outside historical influence.  It was a bold assertion.

At the heart of this assumption was the belief that what we believed and practiced had been transferred, unimpeded and unfiltered, from the early part of the first century straight to our ears in the mid 1900’s.  Our teachers were well-intended but naïve.

In point of fact there had been a number of influences that subtly changed the way that the first century message of Jesus was understood not the least of which was Greek philosophy.  The influence of Plato and Epicurus, for example, is still felt.

Plato was born about 429/428 BC and is known for his belief that spirit is good but matter is evil.  Plato’s teachings became the foundation for a school of thought called Gnosticism, and there were some first century Gnostic teachers who said that Jesus could not possibly have lived in human form because matter is inherently evil. END_OF_DOCUMENT_TOKEN_TO_BE_REPLACED

Matthew said that this angel rolled back the mill-stone door of the tomb of Jesus and was sitting on it when the two Mary’s arrived.  Luke said that Joanna was there too.  They came expecting to have the awful task of putting aromatic spices on a body already beginning to decay – a measure of the love that they had for this dead one.

The Roman guards that were supposed to be guarding the door of the tomb were dumbstruck by the angel’s presence.  Who wouldn’t be?  A giant mill stone moved about like a marble.  An angel sitting on the door like he was taking a coffee break.  The people who were supposed to insure against anything fishy were lying in a stupporous heap against the tomb. END_OF_DOCUMENT_TOKEN_TO_BE_REPLACED