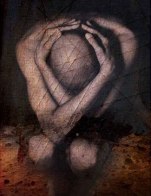 I lived in Minnesota in the 70’s when the movie, The Exorcist, made its debut on American screens. The movie terrified audiences, and some people even imagined being stalked by demons trying to capture their lives.

When I first started working on the sermon I will deliver on February 24, my mind floated to that movie and Linda Blair’s head doing a 360. I concluded long ago that the movie only trivialized the possibilities for evil in this world. And the greatest evil is not something that makes your head spin, but rather which causes you to hate everything that is noble and beautiful.

The man of Luke 8 was kicked out of his village, and he had to live in a graveyard. He lost all of the things that made him human. No one close to him could hug him any more. He no longer was embarrassed by anything. He didn’t care about any of his world’s folkways.  He had none of the consciousness that would have said, “I don’t have any clothes on,” or “I have driven away everyone that is dear to me.”

Linda Blair’s excellent makeup was scary, to be sure.  But it was cartoon.  I never expect to see her approaching me on the sidewalks of Merced.  I do, however, see the plastic bag man fairly often.  He seems, to me, to be more like the poor man of Luke 8.   Living outside the boundaries of human interaction.  Never talking to anyone or having a meal with a loved one.  Grotesque in his appearance.

Linda Blair’s makeup was scary, but her character didn’t violently assault others as some people do.  She didn’t organize gangs or inspire others to steal or destroy.  She didn’t sexually abuse children or abandon them without any of life’s necessities.    She didn’t look friends or loved ones in the eye and boldly lie.

The true evil works without makeup.  It takes over the lives of people who look “normal’ in all the ways we can observe, but who, underneath the surface, are prey to their emotions, unconcerned about their relationships with others, and willing to do anything to serve the “voice” that whispers to them.

True evil can show up at work.  It can infect friendships and marriages.  Like the demon-possessed man of Luke 8, evil can cause a person to renounce everything that is dear, noble, and beautiful.

Now that is scary!

2 thoughts on “My name is legion.”