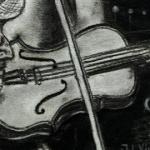 The virtuoso caresses her violin,
And the two merge into one – flesh and spruce.
Chin hugging the wooden body,
Strings teased by flesh into singing their melodies.

No magic this violinist’s craft.
She did not wake up one morning
With Tchaikovsky flowing from her fingers.
For years she courted and romanced the music.

All other loves were spurned.
Violin and lover spent years holding and being held;
The violinist need only close her eyes
And she could imagine the wood’s grain underneath her touch.

As an old woman, the violinist
Realized that the instrument was her companion
Richly oiled by her fingers’ caresses
Made alive by molecules vibrating to music’s voice.

Once she had been a carefree girl
With no burning desire or insatiable appetite
Until the violin came into her life
And all other possible loves became mute.

So also a love for God
When given time and practice
Becomes music which comes not from a box
But from lives vibrating in harmony to His symphony.

Nor does this music come magically in the night.
A virtuoso spends a lifetime strumming
The strings of discipleship and love
Until the music becomes autonomic and all other loves