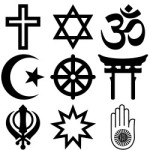 “You must be religious.”

She breezed by my table on her way to sit with a 70-ish friend for coffee. She didn’t fit-in with the 20-somethings all around her.

Acting like she had spotted an almost extinct bird species, she stopped at my table and motioned toward my open Bible. “You must be religious.” Then she touched the “National Pastors’ Convention” patch on my shirt. She muttered “pastor” as she turned toward the table where she was sitting.

My face must have registered some sort of reaction because on a second pass by my table she said, “I didn’t mean to embarrass you.”

I wasn’t embarrassed; it was more like puzzlement or disgust. She could have called me “communist” and I would have liked that better than “religious.” Not that I’m a communist; ”religious” seems like such an insulting word.

“Religious” is based on stereotypes. “If you go to church you must be religious.” But a coffee shop barista told me her most un-favorite day to work is Sunday when “religious” people come in. She called them demanding and rude.

“If you carry a Bible you must be religious.” When the lady passed by my table she noticed my opened Bible and assumed I must be religious. On the other hand, I know people who study the Bible as a curiosity or a hobby, not to have their life changed by it.

There are parts of the world where wars are fought in the name of religion. Some of the most intolerant and unloving organizations in the world call themselves “religious” but their ethics contradict their claims.

“If you’re a clergy-person you must be religious.” Yet, our headlines are filled with stories of such folks who molest children and act with impunity on their desires. This is certainly not a model of “religious” that I would want to imitate.

I would rather she had asked me a question rather than making an assumption. Something like, “what are you reading,” or “it looks like you are getting ready for something?” I could have told her I was preparing a sermon or that I am a disciple of Jesus. Either of those questions would have produced a smile rather than the look of utter perplexity.

I wish I could call her back and say, “I’m not religious.”

One thought on “I am not religious.”