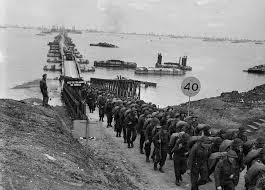 Arromanches-les-Bains is a town in the Normandy region of northwest France.  It is most remembered for the role that it played in the D-Day invasion and the liberation of Europe.

After the D-Day invasion the Allies assembled an artificial harbor at Arromanches, including a floating roadway that allowed ships to off load supplies directly to the roadway.  It was from this harbor that supplies and troupes were unloaded to support the invasion – to the tune of 9,000 tons of material every day.

The port, that did not exist before D-Day June 6, was commissioned on June 14, 1944 – a feat of Allied ingenuity and hard work.  The site of the first trucks rumbling off the floating roadway into the narrow lanes of Normandy was a blessed site to the French who had seen the Germans goose-stepping through their towns.  END_OF_DOCUMENT_TOKEN_TO_BE_REPLACED