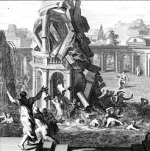 People have debated the cause and purpose of suffering for centuries.  Job is the person most associated with this struggle to discover why.

The book of Job is about 4 miserable friends who visit Job to be of some comfort to him.  Instead they only add to his pain.  “Stop assuming my guilt,” he told them.  “….for I have done no wrong,” Job 6:29.

The question of suffering is never solved.  No one has ever been able to say categorically that this or that is the reason suffering occurs.  The best answers are simply a well-educated guess based on the character of God and the evil of our world. That said, I believe that suffering arises from the choices that human beings make in the exercise of their free will.

On one occasion some people informed Jesus that Pontius Pilate had murdered some people at the Temple in Jerusalem.  Pilate was Governor of Judea by appointment of the Roman emperor, and he is also associated with the crucifixion of Jesus.  The people bringing this information would have probably accepted the wide-spread belief that there was a direct correlation between all suffering and sin.

The assumption of a direct connection between catastrophe and sin contains some assumptions:

In the Luke passage, Jesus says that the only assumption we should make is that all creation is failed and in need of repentance. Everything else is irrelevant and random.

One thought on “Guilt by Catastrophe”