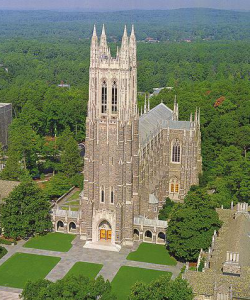 William Willimon, Dean of the Chapel at Duke University, once told a group of pastors about the outrage of a parishioner when a gallows, complete with noose, popped up on the front lawn of the Duke Chapel. The Wilmington Morning Star reported that the gallows was part of the set of a movie being filmed on the iconic lawn.

According to the parishioner, a gallows had no place in front of a nice church. Indeed, the gallows stood for violence and death – not the sort of thing that polite church-goers would want to see walking into the narthex.

However, in his sermon to pastors Willimon reflected on how many churches have a cross hanging over the altar of their sanctuaries. In its day the cross was the most horrible mode of death the Romans could devise. So the gallows on the Duke lawn was in good company with the cross on the wall of the church – and in the pain that they both carry with them.

The first Easter knew that pain because it was reeling from the execution of Jesus. Burial linens were still folded in the opened tomb. The body was missing, and disciples were left with their fears.  Confused disciples and a missing body of Jesus are not the way we want the gospels to end.  Cue the happy ending.

In fact, if you look for it, you will find more fear hanging around the tomb than faith. No hot cross buns or Easter bonnets here. The triumphal parade that led into Jerusalem had turned into crucifixion, a suicide, fear, doubt, and demand for proof.

The gospels are honest about the state of Jesus’ disciples. Matthew said that fear and joy walked around arm in arm. Even in shy worship gatherings, there were some disciples sitting there saying, “I have my doubts.”

Don’t believe it?  The gospels are full of doubt in their Easter endings.  They sometimes sound like the offended parishioner at Duke Chapel saying, “get rid of that upsetting image. Cue the happy ending.” But sometimes our walk with Jesus takes us through the “valley of the shadow of death.”

The book of Acts begins 10 days before Pentecost.  Left with Jesus’ promise of blessing, the disciples spent the next days praying and preparing.  The formerly sad, confused disciples of Jesus were now knit together with victory and joy.  As they came to understand that the trip to Pentecost led through the cross, their sorrow faded.  The awful cross became the icon for the victory of Jesus.

Though the disciples were full of fear and doubt on Easter morning, by Pentecost they said, “Go ahead, build your gallows on the church lawn.  We know that it is powerless to overcome what happens in the hearts of those who laugh at its death and know they will ultimately slip through its noose.”