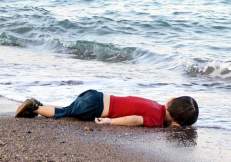 “God’s got this” – mostly heard when some concern has been expressed concerning someone’s health, a crisis, or unexpected negative event.  On the face of it, it sounds so religious and holy – “Relax, God’s got this.”

But is God really managing the situation?  What about when someone is burying a loved one for whom s/he prayed to be healed?  With bitter tears flowing down his/her cheek.  Does God really “have” it?  To believe that, one has to be willing to accept that God is responsible for the death.  Or what about the little dead child on the Mediterranean beach?  You can’t choose what God’s “got” when you pull out the God card.

Maybe God is down on the beach grieving with the parents.  Sad for all the pain and grief brought into existence in the Garden in the beginning.  Maybe, rather than creating the grief, God is waging war against the forces that cause this grief.

One of the best places to explore this is in Job.  Poor Job was covered in boils, and he lost everything dear to him except his complaining wife.  Children, livestock, wealth – all gone.  Job’s friends hurled accusations as a way to explain the reason for Job’s suffering.  “It’s obvious that you did something wrong; you’re being punished” was their explanation.

God called their explanations “ignorant.”  Then he said to Job, “Brace yourself like a man because I have some questions for you.”  Clearly, God did not appreciate the trivial, flippant attempts at explanation.  All Job could do was dwell in the uncertainty and mystery of the moment.  “Why are you doing this to me,” was the best he could muster.  In the end, God honored Job by telling Job’s friends “I am angry with you….for you have not spoken accurately about me as my friend Job has.”

People who pretend to know what God is doing are like Eliphaz, Bildad, and Zophar – “not speaking accurately about God.”  They are like the person who tells a grieving mother that “God needed your child more than you do.”  Or, even more stupid, “God needed another angel in heaven.”  Who dares to make such explanations?

“God’s got this” is based on some dangerous assumptions.  The first is that God is micromanaging events.  The problem is that if He is doing that for one event, he’s doing it for every other one as well.

Another assumption is that you know what God is doing and what God wants.  We simply do not know that.  There is also the danger that what we think God is doing is merely a projection of our own wants and needs at the moment.  What we think about God often changes when we ourselves are in the midst of the disappointment or struggle or the silence.

A third assumption often denied, is that God is going to work situations out to one’s liking.  Thanks to the health and wealth gospel folks for this assumption.  However, we’ve all witnessed times when things don’t work out the way we would prefer, for example, when the diagnosis is stage 4 cancer.

Prayer is a natural human response when times are challenging and tough.  We pray for deliverance or healing or success.

There is a sort of agony to prayer.  Jesus said it is like a widow who nags a judge in regard to her case, and it is only in her nagging that she gets his attention and favor.   Or like a man who knocks on the door of his friend at midnight to ask for food for guests.  Luke says it is only because of his persistence that the now disturbed friend gets up to get the food.  Then, of course, there is also Jacob, who wrestled with God by the Jabbock River all night before he got his blessing.

“God’s got this” sounds so presumptuous.  Who dares to say that they know how the prayer is going to be answered and that they know the mind of God?  Maybe He will, maybe He won’t.  It takes more faith to trust God in the midst of boils and loss, like Job, than it does to think of Him as a talisman hanging around the neck – readily available for a magic rub.

It is both arrogant and Pollyannish to say that “God’s got this!”  It sounds like a put-down of someone who has doubts about what struggle and difficulty mean and why God has not removed the offense being experienced.  In this life everything does NOT turn out loverly.  People die, lose jobs, suffer divorce, are sexually abused, have barrel bombs dropped on them, are gripped by addiction, and die from starvation.

The health and wealth gospel, being preached everywhere, is an equation that promises success to those with enough faith or positive thinking.  Those who “name it and claim it.”  Those who say “God’s got this” as if confidence and certitude get you what you want.

As one televangelist said, “I’m believing God for a Falcon jet.”  Make enough false promises to ignorant, naive, and poor people, and you’ll get your jet.  But don’t blame God.

The person of stronger faith is the one who, like Job, perseveres in the struggle and does not give up.  They will pray, complain, and ask hard questions, but they still believe in the faithfulness of God, however that faithfulness might be expressed in the situation.  “God’s got this” is too glib.

Sometimes life is just ambiguous and full of mystery.  At such fraught times, it takes greater faith to say, “I believe God will be present with me whatever the outcome is.”

One thought on “God’s got this!”